Cement plants, shipping terminals, mines and a variety of other bulk materials handling facilities have incorporated Rulmeca Motorized Pulleys into plant upgrades for more than 60 years. 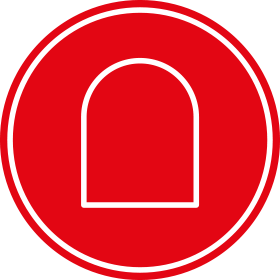 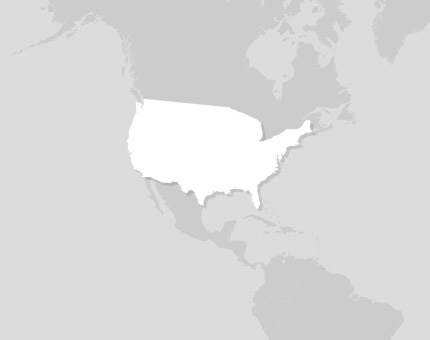 Cement plants, shipping terminals, mines and a variety of other bulk materials handling facilities have incorporated Rulmeca Motorized Pulleys into plant upgrades for more than 60 years.  In 2016, Rulmeca shipped more than 11,000 Motorized Pulleys to destinations on every continent.  This article describes how the Buzzi Unicem USA Pryor, Oklahoma cement plant modified a “dual drive” Motorized Pulley system on their reclaim tunnel conveyor to optimize the continuous online analysis of material chemistry in the raw mix proportioning area.

The reclaim tunnel conveyor moves high calcium limestone from the covered bulk storage area to the ball mills while additional ingredients were also added to the mills.

Buzzi Unicem USA selected Rulmeca Motorized Pulleys in a dual drive configuration for the tunnel reclaim conveyor upgrade primarily because they had good experience with smaller Rulmeca Motorized Pulleys elsewhere at the plant.  The product’s hermetic seal was particularly important to plant personnel because they were concerned about high calcium limestone abrasiveness and occasional tunnel flooding.

Since each Motorized Pulley encloses its motor and gearbox within a pulley shell, it eliminates redundant parts.  Therefore, Motorized Pulleys are lighter than exposed drive systems because exposed systems require motors and gearboxes to be protected within separate cast iron or steel enclosures.  Furthermore, the internal drivetrain acts like a deep beam, resisting deflection in a light weight package and eliminating the need for a heavy "through shaft."

Buzzi Unicem USA’s original reclaim tunnel drive consisted of a 75 HP motor coupled to a pedestal-mounted gear reducer which was coupled to a live-shaft lagged drive pulley with external pillow block bearings.  Starting the empty conveyor from the head pulley caused severe belt bounce (up to four feet) in the conveyor concave curve area at the tunnel exit due to high tension in the belt’s carrying strand.

With a start-up torque of 200%, the twin 50 HP drive system eliminated the problem of inadequate power at start up.  Since the two drives provided a total of 360° of belt wrap instead of 180°, the slack side tension requirement was reduced.  Therefore, energizing the head and tail drives simultaneously eliminated belt bounce when starting an empty belt.  Additionally, the dual drive system dramatically extended belt life.

Originally concerned that the tail pulley drive would be inundated during occasional tunnel flooding conditions, plant personnel reported that the Motorized Pulley has performed well for more than seven years in spite of repeated tunnel flooding.  This proves that the hermetic seal has stood the test of time.

A flux vector VFD drives each Motorized Pulley.  They were originally programmed to drive the conveyor at 60 Hz.  At that time, the reclaim conveyor, fed by six belt feeders, moved “high calcium” hard rock and a mixture of other ingredients at 500 tph at a nominal belt speed of 384 fpm during 10% of the available production time.

Three years after the installation of the new reclaim tunnel conveyor drives, Buzzi Unicem USA revised the process to include the installation of an online cross belt x-ray analyzer and a raw material handling system that included six bins and associated weigh feeders, enabling the plant to improve product quality.

Materials including low calcium rock, bottom ash, bauxite, and iron ore were transferred from six hoppers and combined with high calcium limestone from the bulk storage shed on the reclaim tunnel conveyor and analyzed by an online cross belt x-ray analyzer.  The analyzer sends a signal to a PLC to adjust feed rates for all materials as needed to achieve the desired chemistry.

The two objectives necessary for this revision were: (1.) to increase the period of time during which material was transferred from the raw storage area to ball mills and (2.) increase the material bed depth to improve the performance of the X-ray analyzer.

Since a control algorithm adjusts the feed rate to the hoppers every five minutes, Buzzi Unicem USA decided to decrease the reclaim tunnel conveyor flow rate and increase the time during which the conveyor was working.  Flow rate decreased from 500-600 tph to 75-200 tph and operating time was increased from 10% to 80% of available production time.  Average flow rate is currently 80 tph.  In other words, rather than moving 500 tons in less than one hour while the X-ray analyzer made 9 chemistry adjustments, the plant now moves 500 tons in approximately 6 hours, enabling the X-ray to make more than 75 adjustments.  By decreasing belt speed from 384 fpm to 244 fpm, material bed depth is increased 38% at 150 tph and 29% at 80 tph.

In addition to the general decrease in reclaim tunnel throughput, the raw material PLC was programmed to adjust throughput from 75 tph to 200 tph, as needed.  The reclaim tunnel belt speed as well as the speed of each of the six hopper feeder belts are controlled by the PLC as guided by the “decisions” of the online cross belt x-ray analyzer.

The Buzzi Unicem USA experience is typical.  Many international major bulk materials handling facilities have taken advantage of the versatility of Rulmeca Motorized Pulleys, revising how they are employed, as necessary, to adapt to changing plant operating conditions.  The growing use of VFDs has made ac squirrel cage induction motors more flexible while offering higher levels of control and protection.

PRODUCTS USED FOR THIS PROJECT 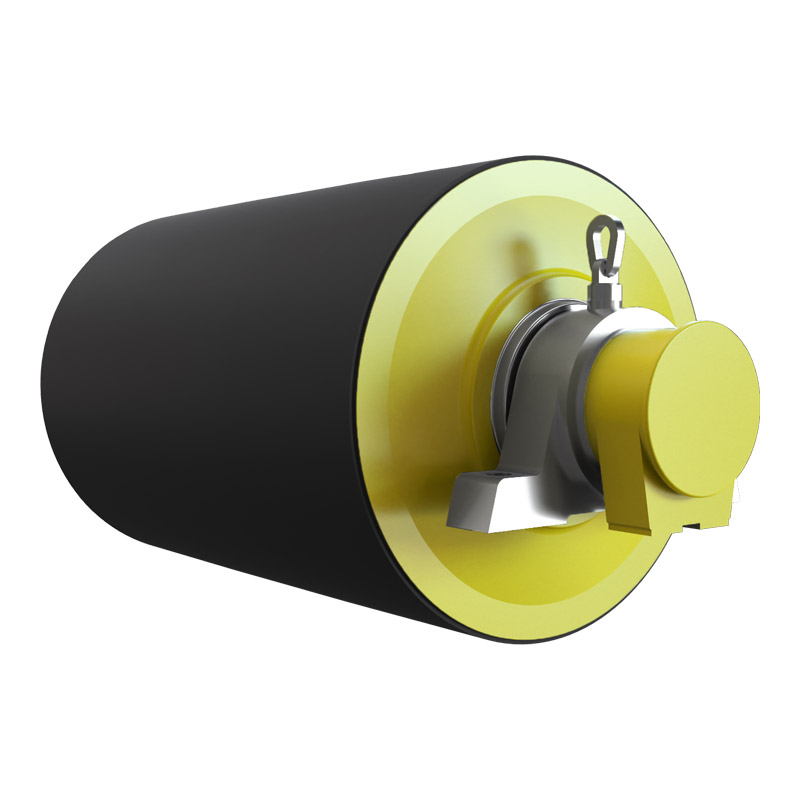 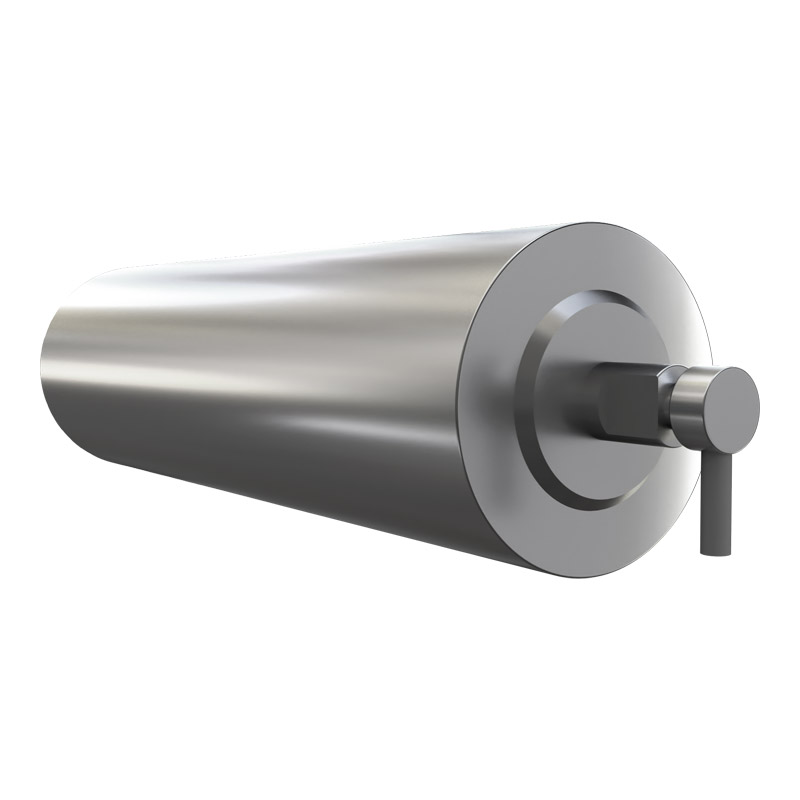 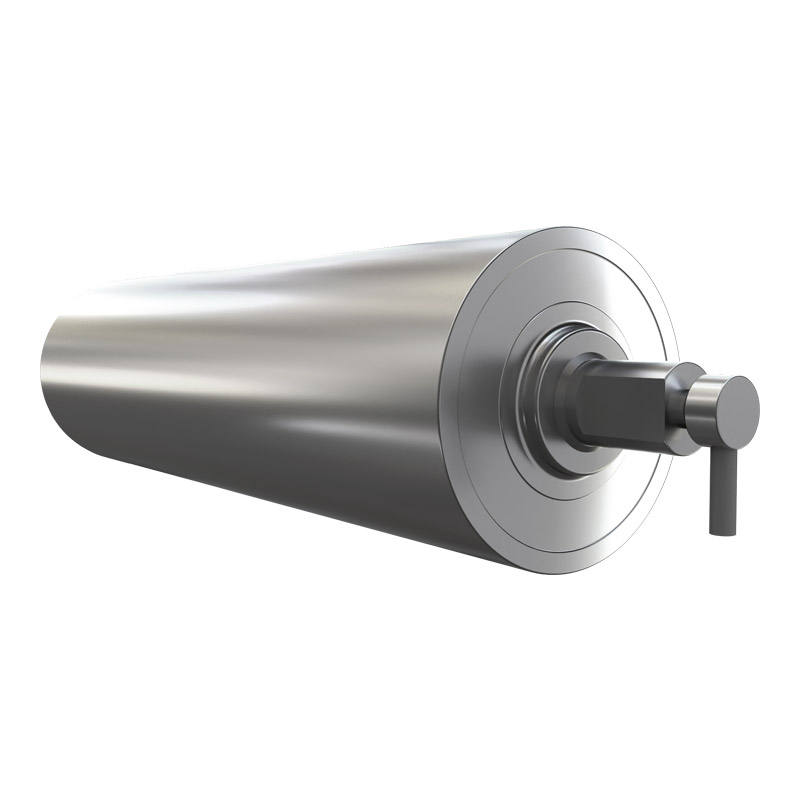 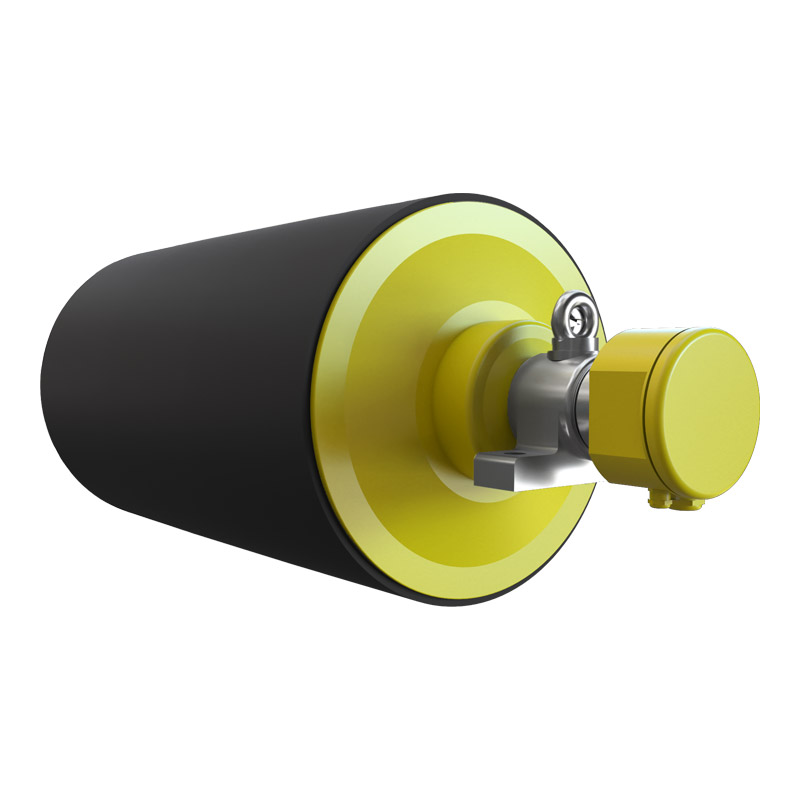 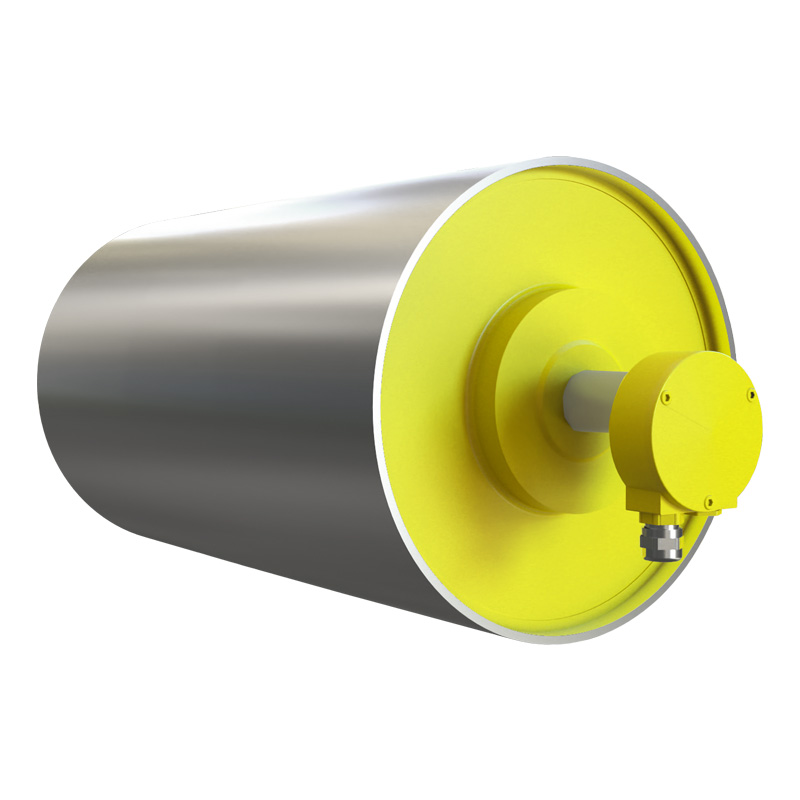 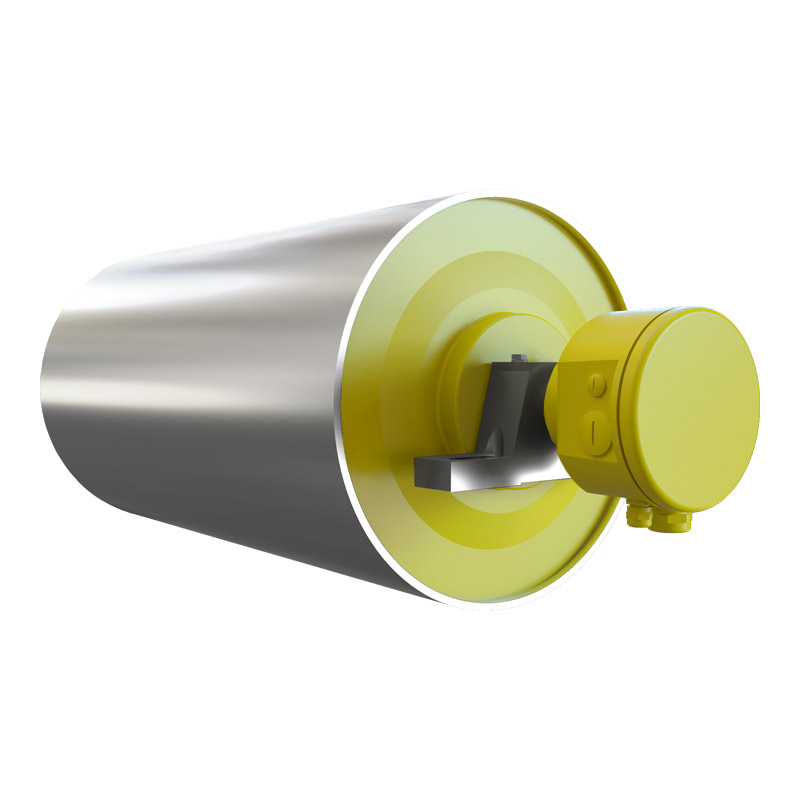 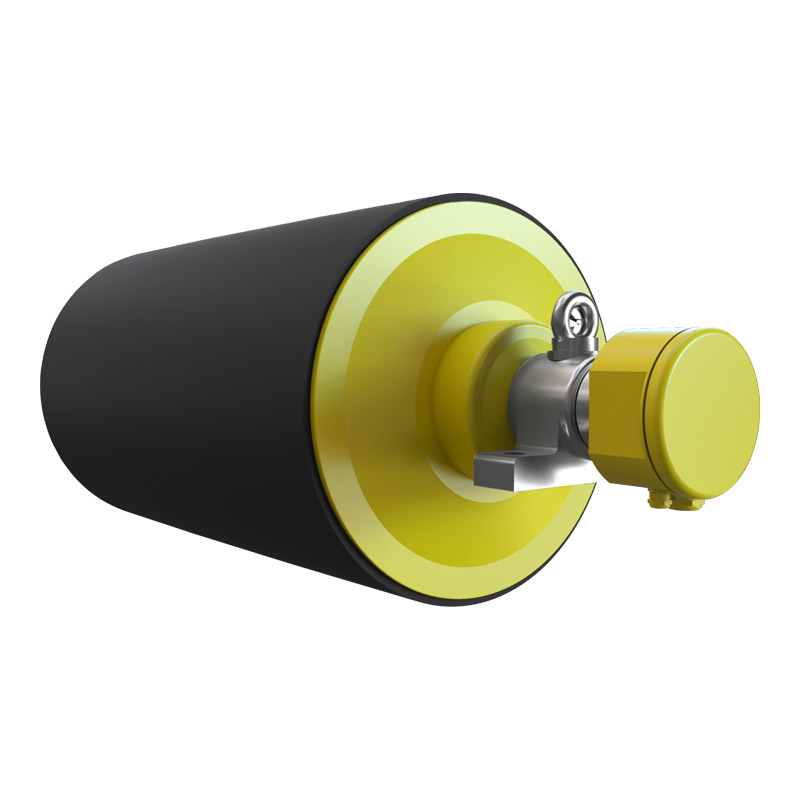 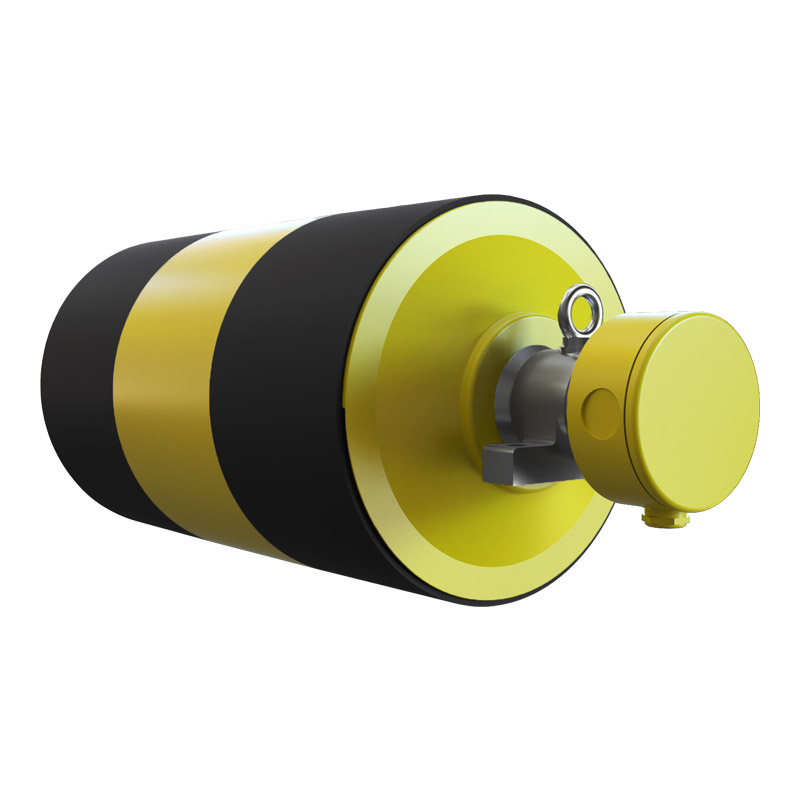 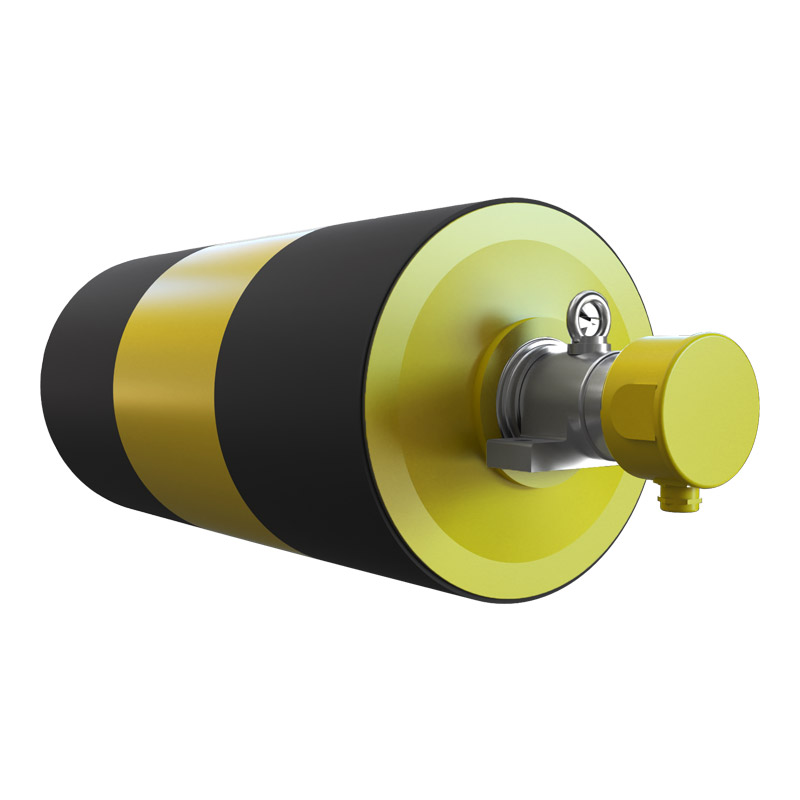 The longest belt conveyor ever built in Asia: 80 Kms.

Retrofit of cement conveyor with high-performance rollers from Rulmeca

The Oman Cement Company (OCC) SAOG, Muscat, Oman, had to upgrade the performance of its 30-year-old conveyor, which transports hot cement powder from the cement mill to the silo, from 150 tph to 250 tph.